· Registered
1989 Honda CRX HF
Joined May 29, 2009
·
1,467 Posts
I have not been on here in a while. Good work. I will start working on the angry bumble bee soon. I have been caniblizing parts from my car for my wife's CRX. Now she wants to give it to her nephew. I cannot let my car die. The bright side is I can gent new parts now!
C

· Registered
Joined Jun 29, 2020
·
1 Posts
Do you still have the insight pin out and how you wired the cluster ? I'm doing mine also everything lights up but. There's a few wires mixed match and can't seem to find a lot of info online about this swap
B

· Registered
Joined Oct 18, 2020
·
1 Posts
Hello greetings, just wondering how did you wire up the ktuned converter? I have got my hands on the same cluster and would like to install it to on my 2005 civic dx and so far i was only able to get some dash lights to work but the SPEEDO doesn't have any numbers come on and the FUEL indicator as well nothing or TEMP would you be able to help me out with this if possible

· Registered
Joined Aug 12, 2006
·
20,454 Posts
I'm not a fan of the physical appearance of the Insight cluster, but that list of Frankenparts is cool!
Nice job!

Ironically that actually means more instantaneous torque paired with the economy. It might be faster 🤣

If Honda actually came out with an EV I probably would've bought it but I suppose that's not an option still.

I weighed out the options of building from scratch (parts) an EV buying the motor, controller, inverter, battery, etc. I estimated that would cost me about 15k which is more than I'm willing to spend.

Alternatively, if I bought an older working EV, and gutted it for parts, I could do so for about 5-8k. And it'd come with almost everything. I have a welder to I can fab the mounts. I'd probably still have to figure out axles unless I find an adapter plate to mate the motor and transmission. Keeping the transmission would mean I retain my 5 speed which is tempting. Making balanced axles would certainly be harder so I'm weighing those options.

I've been planning this project for over a year and initially picked up a Fiat 500e as the donor car. What I quickly learned was Fiat locked up the car behind a canbus network that made it difficult to do anything. In short, putting in a custom radio tripped the ecu and almost crippled the car. Imagine if I took out the airbags and ABS. Research also was difficult as there was a gas version and this car wasn't popular so no one cared to hack the canbus.

So when some family wanted to buy the Fiat from me I gave it to them. In the midst of the research I learned the Nissan Leaf has significant support for conversions. Resolve-ev had hacked the Nissan Leaf Canbus controller and was selling essentially a plug and play box.

And today I found a Leaf for 5k. Even the batteries for the leaf would cost more. The leaf motor assembly alone was being sold online for 4500.

Later I will go check the leaf and if all goes well, I'll have another donor car for parts

If all goes well, maybe I'll get AC back in the car too 🤣

The interior of the leaf is gross.

Also I've ordered the Resolve EV controller and will borrowing a cherry picker in 2-3 weeks.

· Administrator
Joined Mar 17, 2005
·
3,639 Posts
Will be interesting to see how his pans out. I've gone through a couple phases where I thought it would be cool to convert my CRX to EV. Watched a bunch of videos. From what I could tell....aside from the massive amount of work, fabrication, etc....it was about $30k worth of parts? Are you seeing the same kind of numbers in your research?

· Registered
Joined Mar 5, 2005
·
10,932 Posts
They have a Honda conversion kit I can see where it sells at...same company makes a lot of vw air-cooled ev conversion

daveb91 said:
They have a Honda conversion kit I can see where it sells at...same company makes a lot of vw air-cooled ev conversion
Click to expand...

That would be interesting to see.

nihkon said:
Will be interesting to see how his pans out. I've gone through a couple phases where I thought it would be cool to convert my CRX to EV. Watched a bunch of videos. From what I could tell....aside from the massive amount of work, fabrication, etc....it was about $30k worth of parts? Are you seeing the same kind of numbers in your research?
Click to expand...

Option A (use Civic D Series Transmission /no flywheel/clutch)
??? For adapter plate between Leaf Motor and current 5 speed D Series transmission
??? For coupler between motor shaft and Transmission shaft

Option B ( civic transmission, with clutch/flywheel)
??? For adapter plate between Leaf Motor and current 5 speed D Series transmission
??? Flywheel bearing and adapter (no idea how)

Yes but the conversion plates are only compatible with the warp motors. I didn't see any options for the leaf. Nothing otherwise wrong with the leaf except I don't like how it looks.

· Registered
Joined Apr 20, 2008
·
1,779 Posts
Based on my current research, it would be hardest to retain the current civic transmission. It would be easier to use the Nissan Leaf single speed transmission and get and axle custom cut with the right splines to use in the CRX.

Either scenario would require a machine shop so I'll need to find one in the California San Francisco area who can do the work and go from there.

Edit:
Oddly, I started watching a guy on youtube who is swapping the Nissan leaf motor into his porsche. (Channel name Performance EV)

He went the axle route but said it would be "easier" to get an adapter for the existing transmission.

Can I convert my car to be an electric vehicle?
permalink
Any vehicle registered in California may be converted to a 100% electric drive, as long as all power is supplied by on-board batteries. All combustion and fuel system components must be removed prior to inspection by a California Bureau of Automotive Repairs Referee station. The vehicle must arrive at the inspection site under its own power, and the referee will also visually inspect to ensure that the vehicle has adequate battery storage capacity for 100% electric operation. Once the inspection is complete, the referee will sign a DMV "statement of Facts" form so that the vehicle can be registered as an EV and removed from the periodic smog inspection program. The statement of fact form is returned to the California department of motor vehicles. To schedule an appointment with California Bureau of Automotive Repairs Referee station, please call (800) 622-7733.

Note
Individually converted vehicles do not qualify for any incentive programs for Certified Zero Emissions Vehicles, including HOV stickers.

At this time, conversion to 100% electric power does not replace requirements for Direct Import or non-USA vehicle compliance laboratory testing. These requirements apply to vehicles originally sold outside the United States and the required modification and testing typically exceeds the value of the vehicle to complete
Click to expand...

I've picked up a coupler that will join the EM57 motor from the leaf to the transmission from the D15Z1 currently in the CRX. The coupler was sold splined for the leaf motor but I will need to extract the clutch from the D15Z1 motor, get it cut, and weld the spline from the D15Z1 clutch to the coupler and get it balanced.

I will need to find a machine shop in San Jose California to do this. Additionally, I need to get an adapter plate to bolt the motor and transmission together. This will require some measurements and if possible an accurate dimensioned drawing so that I can get a machine shop to cut and make the adapter plate.

If anyone knows a good machine shop who can do these things in the San Francisco bay area in California, please reference them.

Resolve EV controller and a pretty straight forward document on how to wire it.


Full document here for anyone curious: 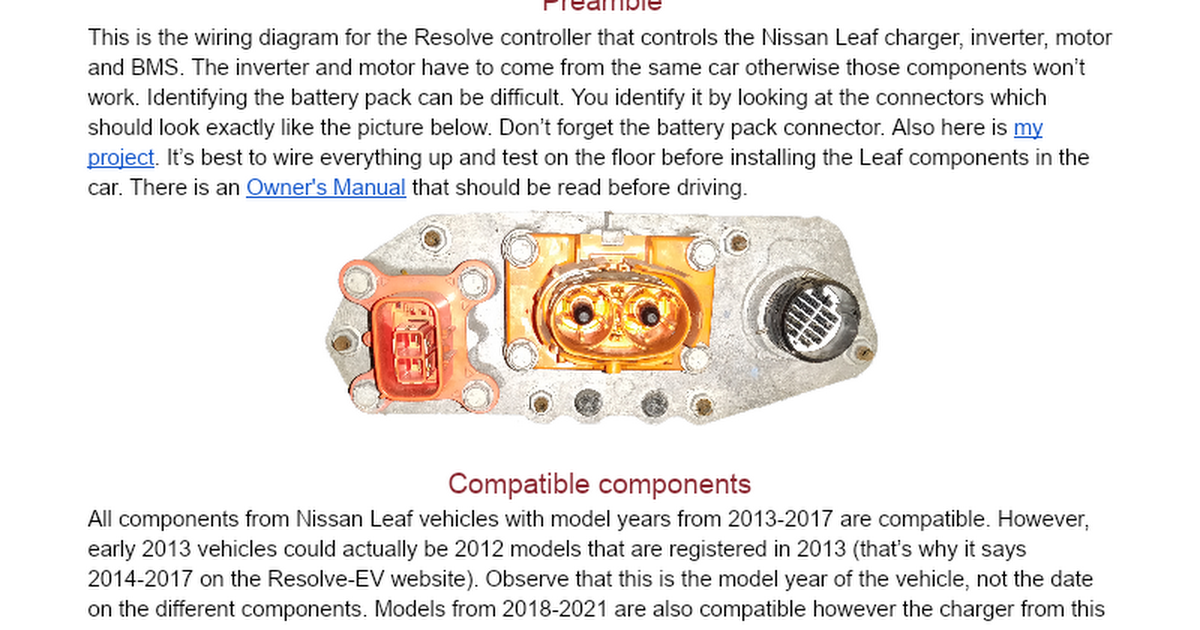 Wiring Diagram & Fun Facts Preamble This is the wiring diagram for the Resolve controller that controls the Nissan Leaf charger, inverter, motor and BMS. The inverter and motor have to come from the same car otherwise those components won’t work. Identifying the battery pack can be difficult. Yo...

The coupler. I'll need to join this with the clutch spline from the D15z1.


Note the motor to transmission won't require a flywheel and clutch hence the coupler for direct drive. This part took a moment for me to understand so I'll explain it here for anyone curious.

The flywheel isn't needed because the EV motor, unlike a gas motor, isn't always turning. It only turns when power is applied. So essentially, release power, wait, shift, proceed. Also to note, the Leaf transmission is single gear so the intent with keeping the D15 transmission is for more flexibility in power. I can run high gears likely from 0-60 or get significant pulling power at lower gears.

In the next month or so, I likely will get started by dropping the leaf battery and pulling it's motor assembly and wires.

I still need a machine shop to build me an adapter plate and balance the coupler.

· Registered
Joined Mar 5, 2005
·
10,932 Posts
From what I have seen with most EV conversion using a manual transmission is they can almost leave it in a higher gear and not even have to shift

· Registered
Joined Apr 20, 2008
·
1,779 Posts
I've been updating my EV build over at Diyelectriccar.com as it has quite a bit of support for EV. I'll be back here to update but if you're looking for a higher frequency, you can find it here:

I'm new and am planning to convert my 1986 Honda CRX into an EV. I have a 2015 Fiat 500e for parts but from what I know so far, the Fiat is sensitive and difficult to use for parts. I believe it uses the Bosch 180/120 based on my Google fu. I've sourced the wiring diagram for the vehicle and...